Sackville rally hears fight against hospital cuts is not over yet

For the second time in four days, hundreds gathered today outside Sackville Memorial Hospital to oppose cuts to medical services there.

Sackville Mayor John Higham told the crowd that Premier Higgs’s announcement last night that the government would not close the emergency room overnight, starting on March 11th, may be only a temporary reprieve.

“It sounds like a breathing delay to get to the next election,” Higham said. “It only says we’re going to think about it.”

The mayor urged people to keep up the pressure and maintain solidarity against any cuts to hospital services.

“Fifty per cent of this province is prepared to fight,” Higham said in an apparent reference to rural New Brunswickers, who would be most affected by government cuts to smaller hospitals.

“Fifty per cent of this province is prepared to bring positive alternatives…to address the underlying issues, but to do it with community strengths, not defeating the community and taking away its strengths.”

‘Community continues to stand up’

Local MLA Megan Mitton confirmed that the Higgs government has also backed down on closing all of the Sackville hospital’s acute-care beds as well as the operating room where day surgeries are performed. 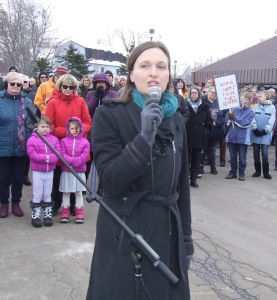 “This is good news for now,” she said.

Mitton said she would be helping to organize community meetings so that people will be ready to suggest their own solutions if Higgs keeps his promise to visit the town to discuss health-care reforms. 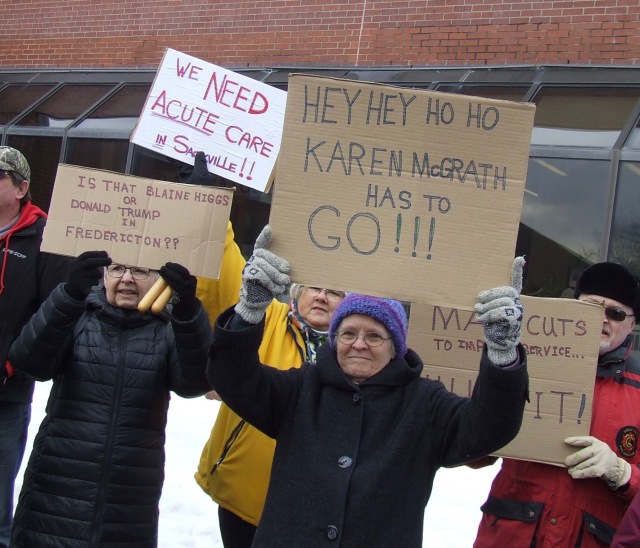 Recently retired family doctor Ross Thomas told the rally that the plan to cut hospital services in Sackville was what he termed “at best, half-baked.”

He wondered how the already overcrowded emergency room at the Moncton Hospital could cope with an influx of patients from Sackville and pointed out that Moncton patients now travel to the Sackville ER to avoid long wait times in the city.

“What is the justification for closing the OR (operating room) in Sackville?” Thomas asked.  “Is there an OR in Moncton empty, staffed, waiting to take the capacity from Sackville?”

He answered a chorus of “Nos” from the crowd with a resounding “No” of his own.

“Is there compelling evidence that our OR is expensive?” he asked. “No evidence presented,” he answered.

“And finally, is there evidence that doing health care in cities is good for rural Canadians? Absolutely to the contrary,” he said, noting that the TransCanada highway runs both ways between Moncton and Sackville.

“Since 80 to 90% of health care costs are generated in our three big cities, it would seem to me to make sense to look there if you’re trying to save money,” Dr. Thomas concluded.

He ended by introducing his medical colleague Allison Dysart who, he said, has been told by the Horizon Health Network not to speak publicly about the planned hospital cuts.

Dr. Dysart himself said he was not speaking on behalf of anyone other than himself.

“Hopefully, this disclaimer will keep me from getting fired,” he added.

Dysart pointed out that generations of “dedicated townspeople, nurses and doctors” had created the Sackville hospital over the last hundred years or so.

He added that it had been a “really hard week” for all staff at the hospital including “the dedicated, fantastic nurses I work with, many of whom were sent layoff notices on Friday,” he said to audible gasps from the crowd.

“What a farce,” Dysart said. 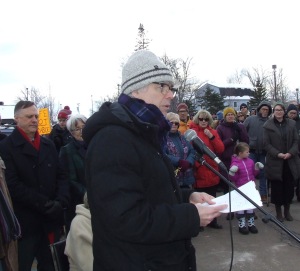 He noted that the Sackville emergency room was closed overnight Friday because only seven doctors are left to cover 14 ER shifts a week.

“And despite the numbers that the government and Horizon were citing about how many patients register in our emergency room after midnight, the fact is that we often don’t get finished up until two or three in the morning with patients who registered well before midnight,” Dysart said, adding that those patients are not included in the official statistics.

He warned that many more ER closures are likely, adding that mismanagement by successive provincial governments has resulted in an “an acute shortage of doctors and nurses with no quick solution in sight.”

Dysart said that “top-down” organizations like the Horizon Health Network always talk about the need for better communication, but never seem willing to listen to the concerns and ideas of medical staff.

“Communication is a two-way process,” he added, “so, my plea is for decision-makers to try this other, rare part of communication, the listening part and then maybe we can find some real solutions to our health-care challenges without scapegoating people who live in rural New Brunswick.”

Robert Inglis, Vice President of Finance at Mount Allison told the rally that the university’s 2,100 students as well as its 500 faculty and staff need access to a 24-hour hospital emergency room.

He pointed out that Mt. A. is primarily an undergraduate university with students in the 18-24 age range — a group at risk for the onset of mental-health issues that could require the need for medical help 24/7.

“In addition, as we all know, the majority of our students don’t have cars and have moved to Sackville away from their families to attend university,” Inglis added, “so, emergency care within walking distance is essential.”

He said the lack of such care would severely hamper Mt. A’s student recruitment efforts.

“The prospect of significantly reduced emergency services represents a real threat to recruit and retain students to our campus from New Brunswick, from across Canada and indeed from around the world,” Inglis said.

To listen to the speeches at the rally click on the media player below. The moderator, who introduces the speakers, is Deputy Mayor Ron Aiken. The recording begins with remarks by Mayor John Higham. 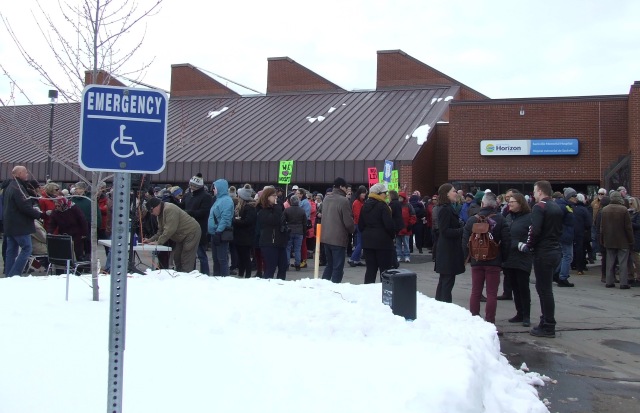