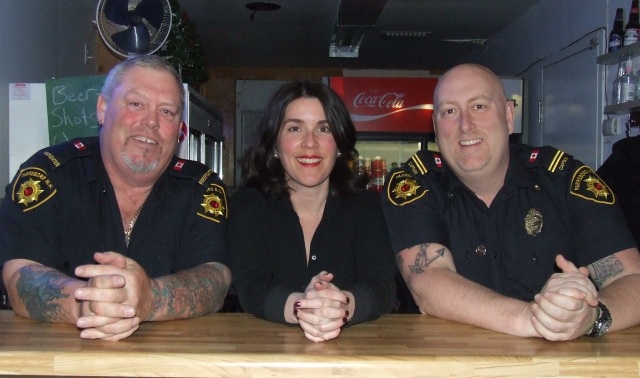 Ship’s Company Artistic Producer Natasha MacLellan has announced that the theatre’s 2015 summer season will include a real-life Parrsboro murder mystery, a racy show about the “plagues and pleasures” of love and a tribute to the late Johnny Cash.

MacLellan gave a preview of the new season last night at the Parrsboro Fire Hall during a $40-a-plate dinner and fundraising event.

When it came time to announce the Main Stage play that will launch the new season in July, MacLellan said, “We’re about to talk about something that I am personally so excited about, it has been hard for me to keep my mouth shut.”

She went on the reveal that the play, Habit of Murder: A Parrsboro Murder Mystery, will be the first of three that are being written for Ship’s Company featuring a sleuth who is a Catholic nun. In this year’s play, Sister Vivian Salter tries to unravel the mystery of the human skull found at Parrsboro’s United Baptist Church in November 2008.

MacLellan drew applause when she announced that actor Mary-Colin Chisholm will play the sleuthing nun for all three seasons. Chisholm co-wrote By The Dark of The Moon, a play that Ship’s Company presented last year. She is also writing the third play in the current murder mystery series.

MacLellan announced that Halifax’s Zuppa Theatre Co. will perform their show Pop-Up Love Party as the Second Stage offering in mid-summer. It’s part musical, part dinner theatre based on Plato’s Symposium, a dialogue about love that takes place during a feast.

“This show is quite racy, quite steamy,” MacLellan said, “and when they told me about everything that was in it, I said, ‘oh, you’re going to have to cut some of that.'” The fire hall audience groaned when she said that Ship’s Co. will present the censored version.

“However,” she added quickly, “You will be able to see the uncensored version in Cumberland Co. at a great restaurant.”

The audience laughed as MacLellan joked that this year’s tribute show will honour a “lesser-known artist” named Johnny Cash. “I have my doubts, but we’ll see if people know him,” she said adding that the tribute show will be performed by The Divorcees who also performed at Ship’s Co. last year.

“Anyone who knows me, knows I don’t have a problem bringing back four handsome musicians to town,” she said. “So, they’re going to do it again.”

For more details on the plays and concerts Ship’s Co. is presenting this year, click here for the Ship’s Co News page.