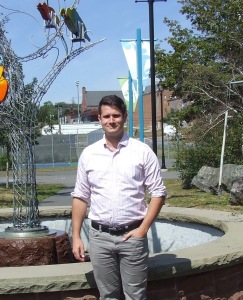 Maxime Bourgeois, the 34-year-old Liberal candidate in Memramcook-Tantramar says PC leader Blaine Higgs tried to recruit him to run for the Conservatives in the 2018 provincial election, but he decided his political sympathies lay with the Liberals instead.

“I really had to sit down and think about what I wanted to do and where I was going,” Bourgeois said today during an interview in Sackville, “and at that time, I realized that my political beliefs are a lot more in line with the Liberals than Conservatives.”

He added that even though the Liberals recognize that governments need to be financially responsible, they’re also compassionate.

“I think we’re a lot more socially conscious about the struggles that people have in front of them,” Bourgeois says. “The government cannot provide every single solution for everything, but I think it’s very important that we are there to help those in need, the vulnerable.”

Five years ago, Bourgeois founded a company in Memramcook that organizes cultural events and forums for Francophone groups such as Canadian Parents for French and French for the Future.

He also set up his own law firm in Memramcook and became the first president of the local Chamber of Commerce he helped launch.

Bourgeois says that while he could have established his law practice in a bigger centre such as Dieppe, he wanted to live in the village where he grew up.

Bourgeois says it’s fine to argue that it takes only 30 minutes to drive to the Moncton Hospital, but that doesn’t account for times when there are severe snow storms.

“My argument is that to support rural New Brunswick we need more services, not less,” he says.

Bourgeois says the PC government failed to consult local people when it proposed cuts to rural hospitals and moved ahead with its plan to sell the historic Memramcook Institute.

“That building is very important for especially Francophone communities across New Brunswick,” he says. “It’s been a pillar for our education, it’s where the University of Moncton started (and) it’s a building that has a lot of potential.”

Bourgeois, who serves on a local committee that is working to preserve the building, says that when the Higgs government froze its spending on renovations in 2018, it claimed there were no plans afoot to revive the Institute.

Bourgeois says, however, that between 30 and 40% of the building had potential tenants including the local municipality that wanted to rent the first floor to develop a community centre.

He adds that when he met with the provincial minister responsible for the renovations, the minister wasn’t aware that anyone wanted to rent space in the building.

“So, they took a decision before actually knowing the facts on the ground and I think that’s wrong, that’s not how you run a province.”

Bourgeois emphasizes that supporting local businesses in rural areas and removing barriers to their success also includes supporting communities in which people stick together and support each other.

He says economic development has to be done in parallel with community development.

“For me, for example, the feeling of coming back home and going to the corner store to fill up the gas tank and to be able to talk to the gas boy because I know him and then, to talk to the cashier because I went to school with her brother, for me, it says a lot about community building and…the lifestyle of living in a smaller community.”