Posted on September 1, 2018 by brucewark 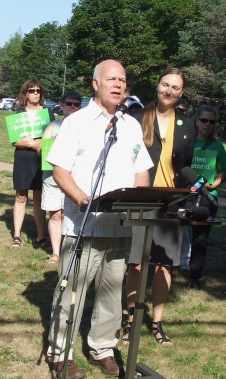 David Coon says the changes would be paid for partly by cutting $100 million a year in government subsidies and tax breaks to big business and charging forestry companies $30 million more for the wood they cut on Crown lands.

During an outdoor news conference on Wednesday near the Sackville hospital, Coon said he’s met with New Brunswickers from all over the province as well as health professionals such as nurse practitioners, nurses, paramedics and emergency room doctors who all say that health care is in crisis.

“What is this crisis of care?” Coon asked. “We have to begin with a wholly inadequate mental health treatment system in this province that is failing everyone,” he said. “We have a virtual epidemic of depression and anxiety disorders in our schools, among our youth in every corner of this province right now and the system cannot handle it,” he added. “The wait times are excruciatingly long to get treatment and long to get diagnosis.”

Coon also mentioned long wait times in emergency rooms, poor rural ambulance services, burnout among paramedics and nursing home workers as well as a looming shortage of nurses with more than 40 per cent of them set to retire over the next five years.

“We have fundamental problems,” Coon said. “Putting duct tape over them as has been the practice of the last number of governments is not the solution. We need fundamental change in the health-care system, we need reconstructive surgery.”

“We will fundamentally move away from the solitary practice of physicians,” Coon said, “to a collaborative system where health professionals such as nurse practitioners, pharmacists and others work hand-in-hand collaboratively with physicians.”

He said eight new community health centres along with 40 new nurse practitioner positions would facilitate the move to a collaborative system while easing wait times in emergency rooms.

Coon also advocates giving pharmacists the power to diagnose and treat minor ailments as they can in other parts of Canada.

“So that instead of using the expensive machinery of an ER and having eight, nine, 10 hours of wait in our city ERs, people will be able to go to the local pharmacist and get treated for minor but painful infections and so on and get their prescriptions right there in a matter of minutes,” he said.

Coon said improvements to health care would be paid for partly by cutting $100 million a year in assistance, subsidies and tax breaks to profitable businesses like the TD Bank.

“We cannot afford to give money or lucrative tax breaks to hugely profitable corporations,” Coon said, “nor can we continue to afford the token property tax bills charged to heavy industries like the oil refineries and the pulp mills of this province.”

The Green leader added that another $30 million would come from charging forestry companies fair prices for the wood they harvest on Crown lands.

“We’ve been earning very little from our forest resources and they’re extensive as we know and so, we will change that,” he said.

“We’ll tackle the health crisis head on,” Coon concluded. “New Brunswickers will then be able to get the care they need and our health professionals will be able to deliver the care they’re trained to deliver.”

To read the entire health-care section of the Green Party platform, click here.

A New Brunswick Green Party candidate is defending her party’s plan to impose tolls on drivers entering the province on four-lane highways.

Megan Mitton is running for the Greens in the riding of Memramcook-Tantramar which is on the border with Nova Scotia.

She says the tolls charged to motorists on the Trans-Canada highway would help pay for another Green Party promise — improved public transportation to all parts of New Brunswick.

However, Mitton says the highway tolls would have to be implemented carefully to avoid hurting people who drive back and forth, to and from Amherst:

Mitton made her comments on highway tolls while campaigning in Sackville with federal Green Party leader Elizabeth May.

The Greens are hoping to make a breakthrough in the riding when the New Brunswick election is held on September the 24th.

To view the sections of the NB Green Party Platform where highway tolls are mentioned, click here.