Up, up & away, $23k for Sackville skateboard park

Posted on September 6, 2017 by brucewark 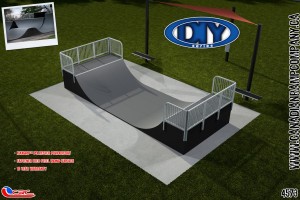 The 20-year-old Sackville skateboard park will be getting a big upgrade this fall if town council approves a $23,000 expenditure for a 30-foot long, 12-foot wide and four-foot high galvanized steel structure known as a half-pipe.

At their meeting this week, councillors were told that the Canadian Ramp Company was the low bidder on the project and that the money would come from the $150,000 the town was awarded as part of New Brunswick’s Canada 150 provincial grants.

Councillors will be asked to approve the project at their next meeting on September 11th.

“As a skater, I’m really excited for a half-pipe in Sackville,” said Councillor Andrew Black.

He added that when he was a kid, there were two plywood structures downtown.

“And kids got hurt quite often. They would just get up and cry and go home…but a half-pipe is just going to be fantastic for the people who skate in town.”

Black predicted that as Sackville’s skatepark develops further, people will travel from other areas such as Moncton and Amherst to skate here. 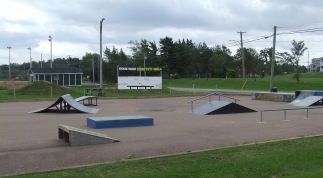 Judging from a search of archival articles in the Sackville Tribune-Post, the town’s skateboard park has evolved slowly over the past two decades.

“When a bylaw was introduced in 1996 prohibiting the use of skateboards on town streets and sidewalks, the town set up a temporary park for skateboarders in the parking lot of Atlantic Wholesalers (now Moneris),” the newspaper’s Katie Tower reported in November, 2008.

“This served the purpose until the new $25,000 park was built in 1997 on Dufferin Street, a year after a group of local skaters approached town council asking for a safe and suitable place to enjoy their sport,” she added.

Along with the installation of the new half-pipe, town staff are proposing to spend an additional $10,500 of the provincial grant money to expand the park slightly and perhaps, spruce up some of the existing equipment.

This entry was posted in Town of Sackville and tagged Andrew Black, skateboard park. Bookmark the permalink.

7 Responses to Up, up & away, $23k for Sackville skateboard park