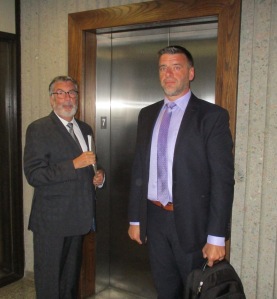 The Bay of Fundy Inshore Fisherman’s Association plans to ask a Nova Scotia Supreme Court judge to block deployment of tidal turbines in the Minas Passage this fall.

During a court hearing yesterday in Halifax, Madame Justice Denise Boudreau set October 20th as the date for hearing the fishermen’s application.

Their lawyer David Coles told the judge the case must be heard as soon as possible in light of a media report that Cape Sharp Tidal Inc. is planning to deploy its first tidal turbine sometime between Nov. 6 and Nov. 8.

The respected online business news site, allnovascotia.com, reported on Wednesday that turbine developer OpenHydro has applied to the Canadian Transportation Agency for permission to use a foreign-registered, heavy-lift cargo vessel called the BBC Pearl for turbine deployment during neap tides in early November.

OpenHydro’s application explains that deployment was delayed, in part, after the discovery of weak fastening components that must be replaced.

The report caught the fisherman’s association by surprise. Their spokesman, Colin Sproul says that during their private discussions with Cape Sharp, the fishermen were assured that turbine deployment had been postponed indefinitely while the talks continue.

“Cape Sharp has related to us that they still intend to negotiate in good faith,” Sproul told reporters outside the courtroom, “but it’s hard for the association to accept that when investigative journalism reveals that they’ve been deceiving us and all the fishermen of Nova Scotia.”

During yesterday’s hearing, David Coles told the judge he would proceed with his application to block the turbines on Oct. 20 if he doesn’t get assurances from the company by the end of September that deployments will not go ahead this fall.

Wark Times has obtained a letter to the federal transportation agency from Jacques Chatelet, the chief operations officer for turbine developer, OpenHydro. (Cape Sharp Tidal Inc. is a partnership between OpenHydro and Emera Inc., the parent company of Nova Scotia Power.)

Chatelet’s letter warns that if the first of two turbines can’t be deployed in November, the company could face disastrous financial consequences threatening its very existence. (To read the letter click here.)

The fisherman’s association argues that the provincial environment minister should not have authorized deployment until baseline scientific studies are conducted to measure the presence of sea life including fish, marine mammals and lobster at the turbine testing sites in the Minas Passage. The association says such studies would take at least a year.

“It’s a sad day for Nova Scotia,” Sproul told reporters, “that the fishermen of this province are being forced to spend their hard-earned money to fight the province on environmental responsibility.”

He added that last year, the lobster industry alone generated $2.2 billion in exports from Atlantic Canada and that the fishing industry in Nova Scotia is the largest single employer outside the public sector.

“That economic benefit to the province also needs to be weighed and that’s something that has never been undertaken by the province or the federal government,” Sproul said.

To read the OpenHydro application to the Canadian Transportation Agency, click here.