Tempest in a turbine: another tidal delay at Black Rock 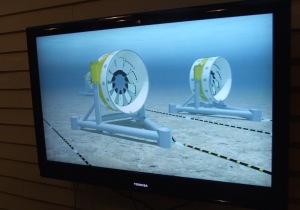 A scientific report from the federal Department of Fisheries and Oceans (DFO) appears to have triggered another delay in the deployment of tidal turbines in the Minas Passage near Parrsboro.

Cape Sharp Tidal had been planning to install a 2MW turbine this month at its test site managed by FORCE, the Fundy Ocean Research Centre for Energy. The first of the company’s two turbines is sitting in Pictou ready for its two-week ocean voyage around Nova Scotia to the Bay of Fundy. But the 1,000 tonne, five-storey-high turbine cannot by deployed without provincial approval and so far, that approval hasn’t been granted.

The DFO report, released in April, points to shortcomings in the required environmental monitoring programs that the company and FORCE have proposed for the tidal test site at Black Rock. The report also suggests more studies may be needed to properly assess the effects of tidal turbines on fish, lobster and marine mammals.

The Bay of Fundy Inshore Fishermen’s Association cited the DFO report in a lengthy petition handed to Premier McNeil about 10 days ago. The petition, also posted on Facebook, calls for a halt to installation of tidal turbines in the Minas Passage and the removal of all power cables and other equipment already installed there.

The DFO report is also cited by the Ecology Action Centre in its statement calling for postponing the deployment of turbines until a proper environmental monitoring program is in place. The respected, Halifax-based, environmental group stresses that it strongly supports the development of renewable, tidal power, but says the concerns raised in the DFO report need to be resolved before turbine testing moves forward.

Last Thursday, Margaret Miller, Nova Scotia’s Environment Minister, told CBC she would not authorize installation of another turbine until she’s satisfied with the proposed environmental monitoring program. A spokeswoman for the provincial department e-mailed this statement to WarkTimes:

“At this point, Nova Scotia Environment, in consultation with the federal Department of Fisheries and Oceans, is currently reviewing the Environmental Effects Monitoring Program (EEMP) required as part of the Environmental Assessment Approval. Written authorization from the department is required before the device can be installed.”

Last week, Cape Sharp Tidal also told CBC it has delayed shipping its turbine to the test site pending consultations with the fishermen who say tidal turbines do not belong in the ecologically sensitive Minas Passage. The fishermen’s association is raising money for a possible legal challenge to the installation of turbines there.

It’s not clear yet how these developments will affect the installation of Cape Sharp Tidal turbines at Black Rock. Until last week, deployment seemed imminent with media reports, like this one in the Globe and Mail, celebrating the positive economic effects of Fundy tidal power.

It seems most likely given the millions already invested by private industry and both levels of government that provincial officials will agree with Graham Daborn, a retired scientist from Acadia, who argues that environmental effects can be gauged with more certainty only after some test turbines are already in the water.

Last month, the Offshore Energy Research Association released Daborn’s  37-page report on the scores of research studies that have been conducted in the Bay of Fundy over the last decade. Regulatory officials will also likely point to many more studies to come.

Here are some of DFO’s criticisms of FORCE’s proposed environmental monitoring program as identified by the Ecology Action Centre:

4 Responses to Tempest in a turbine: another tidal delay at Black Rock