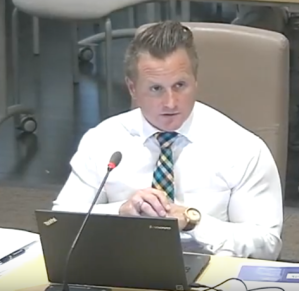 Sackville Town Council has chosen one of the town’s senior managers as its new Chief Administrative Officer (CAO).

During a telephone meeting Monday night, six councillors and the deputy mayor voted to appoint Jamie Burke to the top administrative post while Councillor Bruce Phinney voted against it.

In 2019, Phinney called for Burke’s removal as senior manager of corporate projects, a post Burke has held for the last six years.

A news release announcing Burke’s appointment says the headhunting firm KBRS came up with a short list of seven candidates.

It adds that council ended up interviewing six of them and then brought the top two back for a second round.

Last year, Phinney called for Burke and other senior managers to be fired after the discovery of about 14-thousand tonnes of contaminated soil on land the town had acquired from CN Rail for its Lorne Street flood control project. The cleanup cost taxpayers $525,000.

Burke also generated controversy in 2018 when he told two citizens not to talk to a consultant on the flood control project unless they were willing to pay for the consultant’s time.

This entry was posted in Town of Sackville and tagged CAO, Chief Administrative Officer. Bookmark the permalink.