Mt. A. students use this crosswalk on Main St. near Purdy Crawford Centre, the Avard Dixon building and Windsor Hall student residences

Town Engineer Dwayne Acton has recommended that Sackville spend $32,775 to install a full set of traffic signals where thousands of Mount Allison students cross Main Street on their way to and from university residences, the Jennings Dining Hall and buildings on the main campus.

“We’ve had numerous comments from residents about the crosswalk,” Acton told town council during its meeting on Tuesday. “We’ve had expressed concerns from the university from a safety standpoint as well.”

Acton said that the town has already improved lighting at the crosswalk, but further evaluation showed the need for more safety features.

He added that town staff considered installing flashing signals such as the ones at the crosswalk on Main Street across from the post office, but decided that a full set of red, green and amber lights along with a walk signal would be the safest and best option for pedestrians and motorized vehicles alike.

Acton explained that the signals would be similar to those at Main, Bridge and York Streets or Mallard Drive and Main where pedestrians push buttons to activate walk signals while motorists wait at red lights.

He said the town received quotes for installing the lights from three New Brunswick companies with the lowest one for $32,775 from Roadway Systems Ltd. of Moncton, the company that looks after the town’s other traffic signals as well as its flashing crosswalk lights.

Acton noted that the quote is lower than the $38,600 the town allocated for crosswalk lighting in this year’s capital budget, adding that at its meeting next week, he will ask town council to approve awarding the work to Roadway Systems.

Several councillors responded to Acton’s proposal by expressing skepticism about the need for traffic lights at the crosswalk.

“I still can’t help but feel it’s going to give false safety feelings to the drivers or the students that are crossing,” said Councillor Joyce O’Neil. “Just from being on that street and watching how they [the students] come across that street with their iPads or their cell phones and so on, they don’t even know they’re off campus when they’re crossing that road, so whether they’re going to take time to press a friggin’ button, I don’t know,” she added.

O’Neil also said that using crossing guards at peak times would have more of an impact on safety than traffic lights.

When she wondered whether the university had been asked if it would share the cost of installing traffic signals, CAO Phil Handrahan responded that when he discussed the matter with Mount Allison, “they basically see roads and crosswalks as being our responsibility and they don’t see that they would be sharing in the cost of such.” 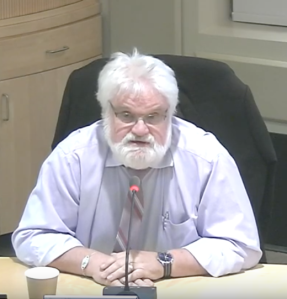 “I hate to sound cynical about this,” said Deputy Mayor Ron Aiken, “[but] you can’t legislate stupid and these students, I don’t believe them sometimes, they just literally march across like it’s a private driveway and I honestly don’t think having a button to push is going to change that at all.”

“I honestly don’t think this [the signals] will work,” Aiken said.

Councillor Bruce Phinney referred to a study of the crosswalk conducted for the town in 2006. The study was supervised by Mount Allison Professor Michael Fox.

Its main recommendation was that the town and the university share the costs of providing crossing guards at peak times during the 24 weeks of the university’s fall and winter terms.

“We believe that this would be the most effective measure that could be employed in addressing pedestrian safety and the appropriate flow of vehicles through this area during peak periods of the day,” Fox’s study concluded.

At the same time, it recommended against installing traffic control devices because they would “actually increase wait times and result in pedestrian avoidance and inappropriate behaviours.”

Councillor Phinney noted that at the time, Mount Allison rejected sharing the costs of crossing guards.

(On March 7, 2007, the Sackville Tribune Post quoted then-university Vice-President David Stewart as saying: “We just didn’t think it was going to be an effective way to deal with the concerns…We didn’t think that a crosswalk guard was going to improve the situation —either from a safety point of view or from a vehicle stop time point of view. It didn’t seem to us to be the right way to handle it.”)

During Tuesday’s council meeting, Phinney said the university should be willing to pay something if it’s really concerned about student safety.

“I’m very, very concerned about the fact that all of a sudden now, all the costs is put onto the taxpayers of the town,” Phinney said.

CAO Phil Handrahan responded that the university has not been officially asked if it would help pay for traffic signals at the crosswalk.

He suggested that as far as the town is concerned, there are issues of legal liability.

“It’s only two or three weeks ago that our treasurer and our engineer were involved in discovery working with our lawyers around an incident on a crosswalk,” Handrahan said. “So in this instance we’ve got safety being raised whether it’s informal or formally, we’ve discussed it [and] I don’t think any of us can put our heads in the sand and say it doesn’t exist.”

For his part, Mayor Higham suggested the university should be asked about its willingness to contribute financially.

“My suggestion would be that I hear multiple interest in having Mount Allison express whether they would want to share this in some manner because it is a shared risk in many ways,” Higham said.

The mayor then asked the CAO to “reach out” to the university to see if “they are willing and able to participate in it financially.”