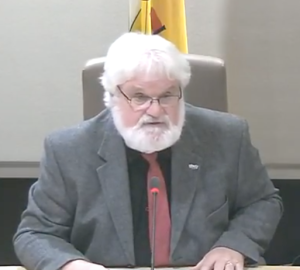 Sackville’s deputy mayor complained during last Monday’s town council meeting that he hasn’t been getting enough information on the latest phase of the Lorne Street flood control project.

“I feel a little like a mushroom,” Ron Aiken said. “I’ve been kept in the dark, but I haven’t got much meat to deal with,” he added.

“I’m being asked to vote on something I don’t really completely understand.”

Aiken made his comments after Town Engineer Dwayne Acton reported the town has received six bids ranging from $1,985,000 to $2,608,000 for construction of two storm water retention ponds that would drain into pipes, culverts and ditches on the way to the Tantramar River. Acton said town staff still need to evaluate the bids before recommending one for council’s approval.

“I spent my career as a research scientist,” Aiken said, “and I like numbers and I like to see what they are, so I can evaluate them.”

The deputy mayor mentioned, for example, he’d like to see more “hard data” on water discharge rates and retention capacity to show whether the flood control project will do what it’s supposed to.

“We’ve heard from members of the public about [how] it can be done a lot cheaper,” Aiken said, adding however, that the critics haven’t supplied much hard information either.

He was referring to persistent questions and comments from Sackville resident Keith Carter, who along with Percy Best and former councillor Merlin Estabrooks, argue that the town should abandon its plans for expensive water retention ponds surrounded by walking trails and rely instead on deeper ditches that would carry storm water in a southerly direction across the marshes to Carters Brook in West Sackville.

“I’m going to have some very serious questions as well,” Phinney said. “I have great concerns about what we are being told [and] what we have been told,” he added. 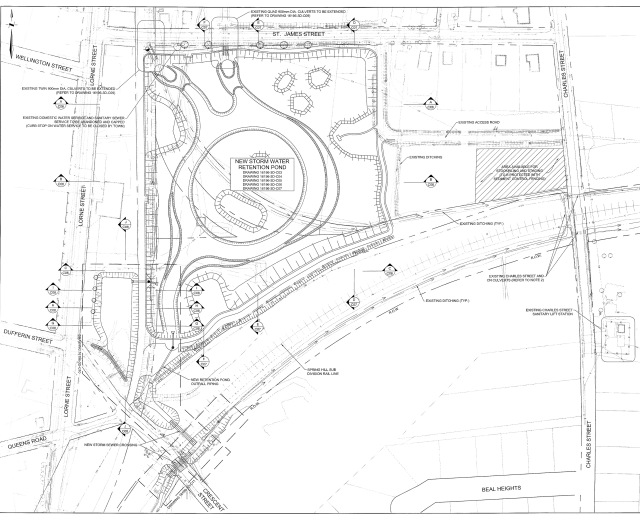 Engineer’s drawing shows large water retention pond south of St. James St. and a smaller pond near the foot of Dufferin St. with ditches leading to pipes and culverts under the CN Rail line and Crescent St. to connect with a ditch in the marshes near the old railway station (click to enlarge)

The town and its consultant Crandall Engineering have revised this phase of the Lorne Street flood control project several times to keep costs within the original $2.9 million budget.

Acton says the town is still planning to construct a storm water retention pond in the old quarry above Salem Street.

He explained that the town would need approval, however, from its funding partner, the Clean Water and Wastewater Fund, to alter the scope of the project to include a quarry pond.

Meantime, Acton is expected to ask town councillors on Monday to award the contract for construction of the retention ponds east of Lorne Street so that the work could be done this winter.

This entry was posted in Town of Sackville and tagged Lorne St. Phase II, quarry retention pond. Bookmark the permalink.