Graffiti reflects anger at Mt. A. as university searches for new president 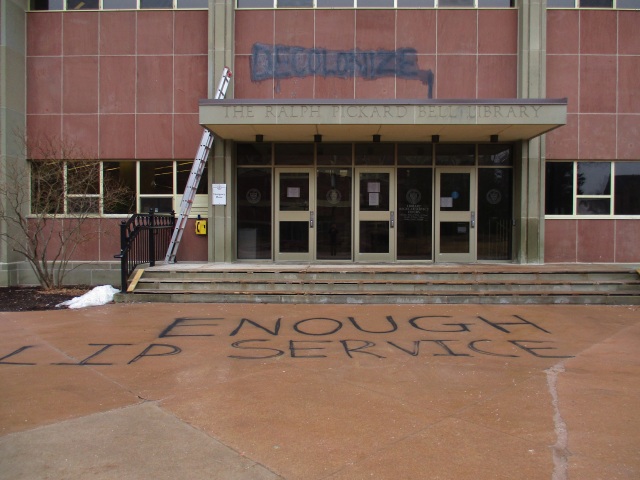 Stark messages at Mt. A library. The ladder at left was used by facilities workers who removed the graffiti

A prominent activist at Mount Allison says the graffiti messages, “Decolonize” and “Enough Lip Service,” spray-painted last night outside the university library, reflect students’ frustrations at what they see as the administration’s inadequate response to their demands for fundamental changes.

Tina Oh, an organizer with Divest MTA, says the student group did not sanction the graffiti and she does not know who’s behind it, but its messages resonate with those who believe the university isn’t truly acting on calls for action from Canada’s Truth and Reconciliation Commission.

The Commission heard testimony from victims and survivors of Indian residential schools and issued 94 calls for action aimed at overcoming the political, cultural and spiritual subordination of indigenous peoples whose land was taken by colonial settlers.

Oh says the university’s pledge to focus on indigenous issues and knowledge — a pledge first made a year ago by President Robert Campbell — is only a form of lip service.

“It’s really easy for the university president to say we must indigenize, we must decolonize,” Oh says, “but of course we’re not seeing that being put into action.”

As an example, she points to an article in the campus newspaper last October, quoting President Campbell as saying that while he was proud the university was flying the Mi’kmaq flag, it would only be temporary.

“There’s a whole series of flag raising events over the course of the year, and the last thing in the world we want to do is get into a competition for flag space. It will return to the Canadian flag. We’re a Canadian university,” The Argosy quoted Campbell as saying.

“Our frustration is clear,” Oh says, “and of course the silence of the university on things like decolonization is very apparent.”

Is graffiti related to search for new president?

Oh says Divest MTA, which has been pressing the university to shed its investments in fossil fuels, attended a meeting yesterday in the library theatre held by the committee that is searching for a successor to President Campbell.

During that meeting, Divest MTA pushed the committee to look for someone trained in or open to, anti-oppressive education; willing to shed the university’s investments in Big Oil; able to repair the administration’s strained relations with faculty and students; and, committed to taking steps toward decolonizing the university partly by integrating indigenous knowledge more fully into its courses and programs.

Oh says that while the presidential search committee listened to members of Divest MTA, it’s questionable whether their demands will have any effect.

“This is the same theoretical committee that put the current president in the position in the first place,” she adds.

Meanwhile, in a statement, the university said workers removed the graffiti from the library shortly after 11 a.m. to minimize damage.

“In this case, there was potential for significant damage to the building because the graffiti was written on sandstone,” the statement said.

It added that graffiti was also removed this year in a couple of other instances on campus.

“Graffiti or vandalism involving offensive text or images would be investigated and appropriate action taken,” it said. “If students were responsible for defacement of property, provisions in the Student Code of Conduct would apply. If the vandalism was committed by someone outside the Mount Allison community, it would be referred to the RCMP.”