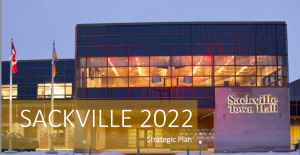 Mayor Higham’s vote in favour of the plan means that the town is committed to following its recommendations. They include conducting an annual survey of Sackville residents to measure their satisfaction with taxes and services. (To read earlier Warktimes coverage of the strategic plan click here and to view the 20-page document outlining it click here.)

Councillor Aiken criticized the plan as “elitist” noting that nearly half of its key informants were from Mount Allison and some of them don’t live in the town. He added that while members of a fourth-year sociology class gave their opinions, no one associated with things like organized sports was consulted.

“I found nothing new or insightful in this report,” Aiken said adding that he looked through three previous strategic plans “and almost every point made here (in the latest plan) I could find in those.”

He said the town had spent a lot of consulting money just to repeat what had already been done.

“It’s almost a generic kind of report, you could have printed it off, filled in the blanks and submitted it,” he said. “To me, it was a waste of time and money given what came out of it and I don’t think we’re any further ahead.”

Councillor Tower advocated sending the plan back to the consultants so they could meet with other key groups such as local high school students and members of the Tantramar Seniors’ College.

Councillor Mitton noted that many different people and groups in Sackville contributed to the new plan and everyone was invited to contribute.

“The thing with a plan is that it’s a living document and so, we can definitely add to it,” she said. “I would encourage councillors or community members who feel that there is something missing to bring that forward and we can see where we can course-correct.”

Mitton also referred to the plan’s call for an annual citizens’ survey that will enable the town to measure whether it’s accomplishing its objectives.

“If for whatever reason there are people who weren’t able to contribute,” she said, “I would hope they would participate in that (survey) and so again, we can adjust, as need be, and if we’re not meeting our metrics, we’ll get that feedback and be able to change what we’re doing in order to meet the objectives.”

Mitton added that the plan provides a framework for moving forward as well as guidance to town staff.

Councillors Bill Evans and Andrew Black also supported the plan with Evans calling it “inspired and inspiring” and Black agreeing with the consultants that those who did participate in helping formulate the plan were “people who care about Sackville.”

In supporting the new strategic plan, Mayor Higham said he had worked on many such plans in the past.

“I know it’s extraordinarily difficult to get input,” he added. “It’s easy to get criticism.”

Higham suggested that the latest plan is consistent with earlier ones.

“If there is an additional quality to this one, I would say it is we now have a public commitment to evaluating the progress on it,” he said. “I think it is consistent with the past and it is setting a framework for the future and it is holding us accountable to that framework.”