From comics to council, a profile of Andrew Black

Town Council candidate Andrew Black took voters on a two-minute, visual tour of Sackville as he made his pitch at an all-candidates’ meeting on April 26th.

“I wanted to tell a story,” the 40-year-old Black said during an interview in Mel’s Tea Room a week after successfully winning a council seat in the May 9th municipal election.

“I love telling stories, I love reading stories,” he added. “In that story, I wanted to pinpoint either positives or negatives about the various places that I saw along the way.”

Black’s tour passed the Tantramar Regional High School where he played football for the Titans before graduating in 1993, then on to the TransCanada Highway with the “untapped, tranquil and powerful Tantramar Marsh” on the left and the “reconstructed waterfowl park” on the right.

The tour paused at the intersection of Crescent and Bridge Streets with a view of the now-closed Moloney Electric where Black’s father had worked for 30 years, directly across from the Bridge Street Children’s Academy where his kids Phaedra 7, and Roman 4, receive child care.

“I moved back here eight years ago to start a family,” Black says during our interview in Mel’s, “and the reason I decided to run (for council) was because I’m invested in Sackville and I hope for a good future in Sackville for my kids particularly, but also for the people I share this town with.”

Black is especially concerned about education, a point he illustrated in his descriptive tour as he passed Marshview Middle School on Queen’s Road. He started school there himself when his family moved here in 1985.

“I remember the school being in a bit of a sorry state then and not much has changed,” he told the all-candidates’ forum. “In fact, it’s a decrepit building that houses our youth and looks utterly sad even from the outside.”

On the other hand, Black slowed down as he admired the Sackville Memorial Hospital on Main Street, appreciating everything that the hospital means to the town as well as people’s desire to hold on to it.

Earlier, the audience laughed as Black’s tour took him to Lorne Street.

“My car started shaking. Driving down Lorne is like making my way through a war zone,” he said, pointing to the terrible state of the road and the poor state of business and housing on a street with economic potential, but that is “currently a flood plain.”

“A lot of the things I believe in are what a lot of other people in Sackville believe in,” Black said in Mel’s.

“Business development is a huge one in my mind. If we don’t have jobs in Sackville and places for people to shop, then we have nothing.”

He suggests that the town needs to market itself more effectively as a business location and that businesses already here need to come together to build a stronger, more unified business community.

Black himself has extensive experience working in and managing retail stores.

During the almost seven years he lived in Toronto, he worked in video and games stores and managed Silver Snail, an independent comic book store. There he indulged the passion for comics that grew in his last year of high school when his friend Tom Bowser introduced him to the world of illustrated storytelling.

“The artistic value of comic books is really undersold by most people,” Black says, adding that comics and graphic novels are about a lot more than just the exploits of superheroes.

“There’s a lot of personal stories that are told by authors, biographies, there’s a lot of non-fiction comic books that teach people about Louis Riel, for example.”

Black’s passion for comics continued during his four years of study at Mount Allison as he and Bowser dreamed of opening their own shop.

On his return to Sackville, Black and his business partner, Cheryl Sears, took over Mr. Movie, a video rental store.

Then, in 2011, his old dream came true with the opening of Black Bowser Comics inside the Mr. Movie store on Main Street.

“The big thing for us was trying to get people to understand the value of comic books and also to engage a new generation of readers. We tried to push pretty hard for kids’ comics and getting kids involved in that community of comic collecting and reading.”

The video rental store eventually closed, but Black Bowser Comics flourished, enabling its owners to hire someone to manage it while Black himself took a job as an assistant manager at the Jean Coutu pharmacy.

Unfortunately, the persistent economic downturn combined with the sinking Canadian dollar forced Black Bowser Comics out of business last December, although its inventory is still gradually being sold.

Black himself says he’s spending more time with his family and working in his spare time on a comic of his own.

“I’m writing a comic that’s a western,” he says. “It’s a genre that has really slipped in the last 10 to 15, 20 years even, so I’m writing a comic about the wagon train in the United States and characters going through trials and tribulations from one side of the country to the other.” 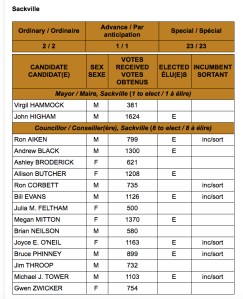 Black says with a smile that he doesn’t expect to have a lot of spare time to devote to his wagon train tale now that he’s been elected to Sackville Town Council.

He adds that he wasn’t surprised at his success, since a lot of people said they were glad he was running and promised to vote for him.

“It’s telling of Sackville’s need for change,” he adds.

“Leading up to the election, I heard a lot of people saying, ‘We need new blood, we need a complete change-over.’ So, I think because we got the highest votes, I think that’s what Sackville’s response was. They wanted new faces.”