The Chair of the three-member panel hearing Parrsboro’s application for approval to dissolve its town status and join Cumberland County has assured town residents that dissolution is not a foregone conclusion.

“This is not a done deal,” Roberta Clarke said during a preliminary hearing held today at the Parrsboro Legion by the Nova Scotia Utility and Review Board. She was speaking to Parrsboro taxpayer David Christie who is asking for intervenor status so that he can introduce evidence and cross-examine witnesses in an effort to show that dissolving into the county is not in the town’s best interests.

“The Board will…hear the evidence and make a decision based on the merits and just because everybody seems like they’re all on the same page, doesn’t necessarily mean that the order will be granted,” Clarke said on behalf of her two colleagues on the panel, Kulvinder Dhillon and David Almon.

She was referring to the fact that the town, the county and the province all plan to argue in favour of dissolution and that unless Christie is granted intervenor status, there will be no formal opposition to it when the Board holds hearings next spring.

Members of the public will get a chance to speak informally during evening sessions scheduled for March 30th and 31st, but won’t have standing to present formal evidence for or against dissolution. 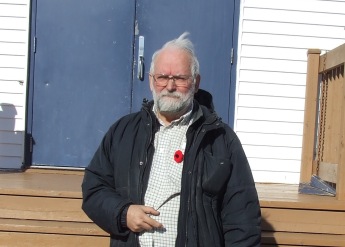 David Christie outside the Legion

Under Board rules, those wishing to be granted intervenor status at the hearings were required to file a detailed application by November 2, but Christie said with only about five days notice, he had no time to conduct the research required to write a 20-page brief. He said some people he talked to advised him to get legal help.

“Put very simply, I’m not a rich person. I can’t afford to go out and hire a lawyer to do things,” he said.

Only about a dozen town residents and taxpayers showed up at today’s hearing.

“One of the reasons people haven’t come today,” Christie told the Board “is because this is all being sold as a done deal, that we have no input into this. It’s going to happen whether we like it or not and we have no real say in it. I don’t agree with that and that’s why I’m here.”

He said the town would be better off annexing West Bay and Two Islands to create a bigger zone for development and for building on the success of the local tourist industry. He added the Board needed to look at all of the possible choices, not just amalgamation with the county.

“So why are we taking a step, in my opinion, backwards and looking at dissolving the town into the county?” Christie asked.

Peter Rogers, the lawyer representing the town and county, along with Duane Eddy, who represents the province, opposed Christie’s request for intervenor status arguing he should have met the November 2 deadline and in any case, his participation would add needless expense to the process.

Chair Roberta Clarke said the Board would take time to consider Christie’s request and issue its decision by the end of the week.

Parrsboro’s Chief Administrative Officer, Ray Hickey told the Board the town is not ready with financial figures for the year ending March 31, 2015. The Board requires those figures to help assess the financial implications of amalgamation. Hickey promised to provide them in the next couple of weeks.

It also emerged that if the town is dissolved, the county might favour combining it with the area that runs to the Colchester County boundary line to make one electoral district.

To read biographies of the three members of the NSUARB panel that will decide Parrsboro’s future, click here.

1 Response to Parrsboro dissolution not a done deal, Chair says