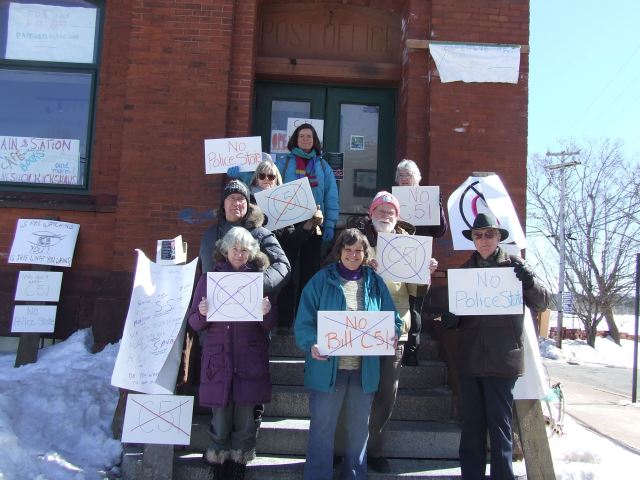 Protesters preparing to march on Main St. (click on photo to enlarge)

A dozen protesters banged pots and pans as they marched from Parrsboro’s old post office up and down Main Street today to protest against Canada’s so-called Anti-Terror Bill C-51. The proposed legislation would give the government sweeping new powers of surveillance and arrest.

“We’re frightened by this bill, which would limit our freedoms to speak out as Canadians on issues that are important to us,” said Judith Bauer who helped organize the protest.

Bill C-51, for example, would give federal governments the power to prevent interference with “the economic or financial stability of Canada.” Critics say this would allow the government to prosecute people who attempt to block such projects as hydraulic fracking, the building of new oil pipelines or the logging of old growth forests.

“Anything that disrupts freedom of expression or just general freedoms is vile,” said Harvey Lev, owner of Main and Station, who was the protest’s main organizer. “C-51 is vague, and in its very vagueness, is dangerous.”

Bill C-51 would make it a crime to promote terrorism, but Lev says that could mean anything.

Four former prime ministers and more than 100 academics, mainly law professors, have signed open letters calling for changes to Bill C-51. Among other things, they advocate better safeguards to protect Canadians’ rights to free speech and privacy as well as to oversee the increased powers the bill would give to police and Canada’s spy agencies.

The Parrsboro protest was one of many taking place today across Canada.

8 Responses to Parrsboro protesters say no to ‘police state’ law