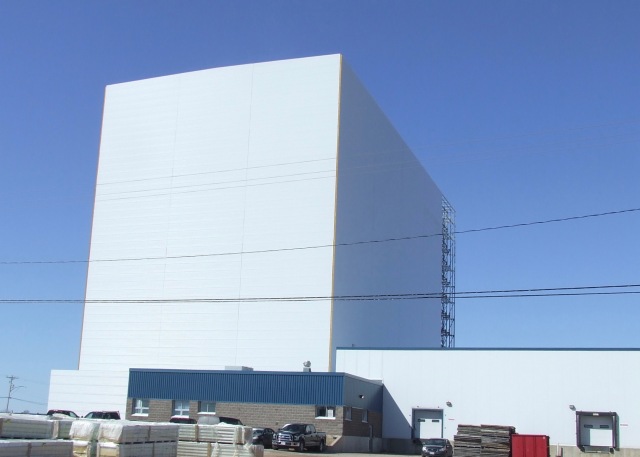 Plans call for the 1,800 sq. metre east side of the Terra Beata food freezer to become a giant projection screen during Sappyfest in August

The Sappyfest arts and music festival is planning an “onside the box” event on August 1st using Sackville’s tallest building as a giant, outdoor projection screen from 9 p.m. to midnight.

Sappyfest Treasurer Jeff MacKinnon says that COVID-19 restrictions have forced the festival to present virtual and online performances this year including a plan to project images onto the 1,800 square metre, east-facing side of the Terra Beata freezer plant in the Sackville Industrial Park.

MacKinnon told Sackville Town Council Monday night that other groups have also thought about using the giant freezer as a theatre screen — one that would be more than three times larger than the biggest, currently operational, outdoor screen in North America.

He explained that the projected images would include art installations, an independent film screening and a pre-recorded performance by an artist already booked to appear at Sappyfest, but who cannot come here because of COVID-19 travel restrictions.

MacKinnon said the name of the artist would be announced later.

He added that although the parking lot at Terra Beata and the space in front of the nearby Sackville Public Works building could hold up to 500 spectators with proper physical distancing rules in place, the plan is not to attract a large crowd.

“The project itself is to project an image on the side of this freezer building that can be documented and recorded,” he said, adding that it could then be shown later during the festival.

MacKinnon said the town could help by closing part of Crescent Street, providing space in front of the Public Works building as well as a connection to the building’s power supply. He also asked town council to waive the provisions of its noise bylaw for the evening event.

Judging from the enthusiastic reaction of several councillors, it appears MacKinnon’s wishes will be granted when town council meets again next week.

“I was grinning like a fool the whole time,” Evans said. “This is something that I and a number of people have thought about, that great big space, we should project something on it. So I’m delighted that you have this idea. I’m really tickled and I’m keen.”

When Evans asked if Sappyfest was also asking for money to help with the event, MacKinnon assured him that he was not seeking more financial support. The town has already contributed a $4,000 special events grant to Sappyfest this year.

“This is fabulous,” Mesheau said. “For what we’re up against right now and what we’re dealing with, very exciting,” he added.

MacKinnon said that COVID-19 restrictions could work to the benefit of Sappyfest in the longer term.

“This year does give us an opportunity to explore new methods that can possibly reshape the way that we do things,” he said.

“Maybe this, if successful this year, becomes a regular part of Sappyfest programming.”

This entry was posted in Town of Sackville and tagged Sackville's tallest building, Sappyfest, Terra Beata. Bookmark the permalink.