Hundreds of students in Sackville rallied in the academic quadrangle at Mount Allison University today before marching to town hall to demand that all levels of government take action on climate change.

Students from Salem Elementary, Marshview Middle School, Tantramar Regional High and the university were participating in a global education strike with young people in more than 100 countries skipping classes to participate in marches and rallies. 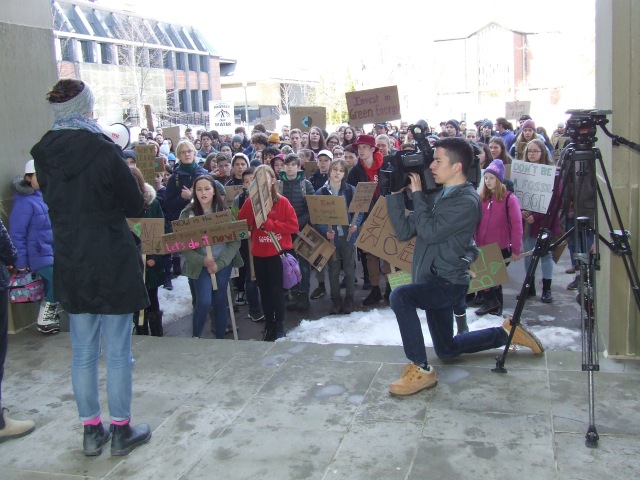 Students rally in the Mt. A. academic quad

In Sackville, students carried a wide range of protest signs including one that read “Capitalism Must Go To Save Our Planet” and another that said, “I’m Sure The Dinosaurs Thought They Had Time Too.” 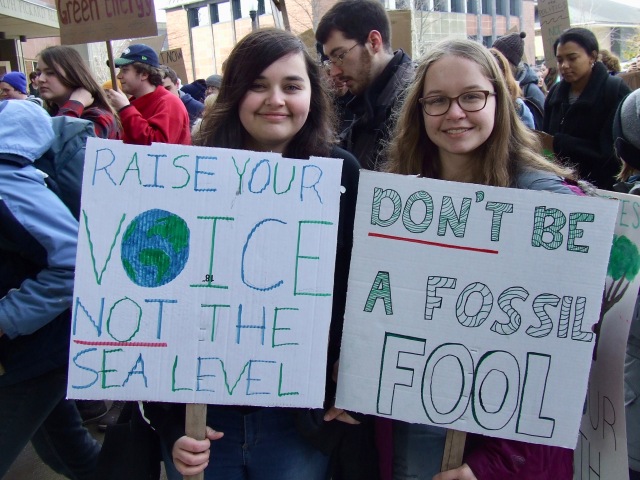 As they marched east on York Street and then south on Main, the students shouted a variety of chants including “No more coal, no more oil. Keep the carbon in the soil.”

Many spoke of their fears for the future in a warming world.

“I am absolutely terrified,” said Mt. A. student Emily Steers as she spoke to the rally outside town hall. She added that when she read the latest UN report on climate change last October, she wept.

Steers castigated politicians who are fighting against carbon taxes while pushing for more oil pipelines. She drew cheers when she called for a fundamental economic shift.

“Our economy needs to change right now away from an oil-based economy,” she said.

Earlier, at Mt. A., environmental science and biology student Shen Molloy warned that Sackville and vicinity is especially vulnerable to climate change because of the potential for flooding that could cut off the TransCanada highway and the CN rail line, shutting down the daily movement of goods worth $50 million across the Chignecto Isthmus.

“It is fantastic to see so many kids here taking action against climate change. It gives me hope for the future,” Molloy said.

“Everyone is responsible for the conservation of the environment,” she added. “Ultimately the greatest threat to the environment is assuming someone else will save it.”

Meantime, Quinn MacAskill, a Grade 8 student at Marshview, spoke at both rallies, reciting a poem at Mt. A. and delivering a plea for change outside town hall.

“I wish to walk through the trees without fear they will soon be cut down,” she said. “I wish to lie on the beach and let sand sift through my fingers, not plastic.”

MacAskill added that she also wished to breathe clean air and eat “food grown by loving hands in the familiar soil of my garden, not food grown by a machine thousands of kilometres away.”

She called on the town to update its Sustainable Sackville plan noting that the plan already calls for protection of both community health and the health of natural eco-systems.

“I believe in those words,” she said, “and I think Sackville has the capability to become a leader in the province and even in our country.”

The letter calls on the town to declare a Climate Emergency, an action already taken by such cities and towns as Halifax, Vancouver and Kingston, Ontario.

Mitton pledged that as the youngest member of the legislature, she would stand with the students in fighting for action on climate change.

Ron Aiken noted that town council has already taken a number of steps such as opposing the Energy East pipeline, banning single-use plastic water bottles at town hall and buying a hybrid car for the bylaw officer.

Aiken drew laughter when he said he’s so old that he participated in the first Earth Day in 1970. He added that his generation tried to do something about what they called pollution. 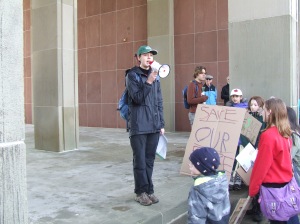 “We failed, we failed utterly,” he said. “Don’t do what my generation did. Do something different, have a new idea and push it forward,” he added.

Hanna Longard, one of the main organizers of today’s march and rallies, called on politicians and policymakers to take the steps students are asking for in their letter.

“If you say no to our asks, you’re saying no to our lives and the lives of those yet to come,” she said. “Don’t let the weight of our broken future sit on your shoulders. Take responsibility and use your positions of power to give us a fighting chance.”

To read the complete text of the students’ letter, click here.