Bernard LeBlanc outside the Moncton courthouse

There were no cheers — or tears — today in a windowless Moncton courtroom when Madame Justice Brigitte Robichaud finally confirmed that Green Party candidate Megan Mitton had won the riding of Memramcook-Tantramar by 11 votes in the September 24th provincial election.

The judge’s declaration came after a recount of 8,213 ballots that took more than two-and-a-half days.

The hand recount demonstrated the accuracy of New Brunswick’s voting machines which recorded 3,148 votes for Mitton and 3,137 for her Liberal opponent Bernard LeBlanc on election night. The recount also confirmed the machine tally for PC candidate Etienne Gaudet who received 1,518 votes and Hélène Boudreau of the NDP who received 410.

“I’m glad the result is complete,” LeBlanc, who had requested the recount, told reporters later as he stood in the fall sunshine outside the courthouse. “The people down in our area wanted to make sure, since it was close, we wanted to make sure that it was proper. It has been done and it has been proven that the number hasn’t changed,” he said. 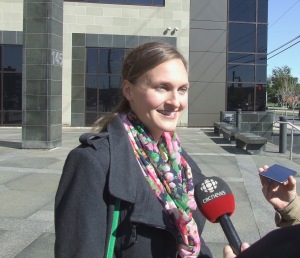 Megan Mitton at the court house

For her part, Megan Mitton said she was breathing a sigh of relief now that her victory has been confirmed.

“I’m feeling honoured that I did receive the most votes in Memramcook-Tantramar and I’m going to represent that riding in Fredericton,” she said.

When asked how she felt about the potential for the three Green members to hold the balance of power when a minority government is formed, Mitton suggested that her party’s three seats are not enough.

“It’s an interesting situation,” she said, “if there were four of us, then we would really hold the balance of power and responsibility, but as it stands, there are three of us and so ultimately, it will be a Progressive Conservative that would determine what happens, whether the Liberals are able to form government.”

Aside from the three seats held by the Greens, the Liberals hold 21, the PCs 22 and the People’s Alliance three. Any minority government would need the support of at least 25 members to govern in the 49 seat legislature.

Mitton said the Greens have “opened a dialogue” with the PCs, but she suggested it’s still too early for them to decide who to support.

Mitton estimates she knocked on at least 3,000 doors since the spring when she started campaigning. She was also helped by two high-profile visits, one by federal Green leader Elizabeth May which attracted about 200 people and the other by the well-known CBC TV science host David Suzuki attended by about 500.

On the other hand, Mitton’s Liberal opponent seems to have skipped door-to-door canvassing at least in Sackville with volunteers leaving campaign literature accompanied by a notice “Sorry we missed you,” even when voters were home. LeBlanc also skipped the first all-candidates’ debate on environmental issues and his Sackville campaign office was open for only for a few hours most days. While Green Mitton lawn signs sprouted up on Sackville lawns throughout the campaign, it was hard to find any Liberal ones. Premier Brian Gallant made one visit to the riding, but said little or nothing about Bernard LeBlanc. Aside from reporters, Gallant’s Memramcook rally was attended by about 25 Liberal supporters.

Mitton says she was able to build on her 2014 campaign by staying engaged in the community and getting to know the whole riding.

“I also think that there’s been a shift politically across the province to looking for different types of voices and different ideas in the legislature,” she adds, “and it certainly doesn’t hurt that the Green Party leader David Coon has been in the legislature and shown what just one voice can do and now, we’re able to triple that impact.”

Mitton says she intends to set up constituency offices in both Memramcook and Sackville just as her predecessor did.

A tally of the 2018 results shows that the predominantly French-speaking areas in the 12 polls in and around Memramcook overwhelmingly supported Bernard LeBlanc who received 1,852 votes to Mitton’s 638.

The results were reversed in the predominantly English-speaking town of Sackville’s 12 polls where Mitton received 1,583 votes to LeBlanc’s 686.

To look at my own version of poll by poll results in Memramcook-Tantramar based on figures from Elections New Brunswick, click here.

To listen to Megan Mitton speaking with reporters after the recount, click on the media player below.

Click on the media player below to listen to Bernard LeBlanc speaking with reporters outside the Moncton courthouse.